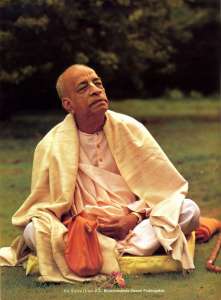 The first piece of real estate that Srila Prabhupada was able to obtain was a small storefront in New York’s Lower East side. He wished to open a spiritual centre there. At the time he only had the funds to afford the first month’s rent. He had a few young followers then. When they asked him what they should name the centre, he said, “International Society for Krishna Consciousness”. His followers were dumbstruck. Here was a man who did not know how he was going to pay the rent for the next month. All he had was a storefront. Yet he wanted to call this centre an “International” society. They enquired. Srila Prabhupada replied, “We already have temples and devotees all over the world. There is only one thing that separates us – time!”

Pharmacist by profession, Srila Prabhupada came to the United States of America with a vision. Under the instructions of his guru, he left India at the age of 69 to take his philosophy to the world. He also suffered two heart attacks on the ship while traveling from India to the USA. Landing in a strange foreign country with just 7 dollars in his pocket, he established 108 temples all over the world within a span of 11 years.

One of Srila Prabhupada’s greatest contributions was his books. He is well known for his scholarly translation of sacred Sanskrit texts which were studied, their knowledge passed through the generations in disciplic succession. His books are still widely studied by all who wish to follow in his path and serve as a guide and reference for all his devotees who aspire for spiritual elevation.

While he circled the globe 14 times bringing Krishna Consciousness to people on six continents, he also returned to India several times sparking a revival and interest in the ancient tradition followed by the Gaudiya Vaishnavas. When we hear about the story of Srila Prabhupada it can sometime feel like the world conspired to manifest his vision in those 11 years. And it did. So much so that his disciples were left dumbfounded as things fell in place like a jigsaw puzzle. It was an extraordinary feat. And it was achieved by a man who was no less extraordinary.

Why does God allow suffering?